★ RATED AS EXCELLENT ON TRUSTPILOT 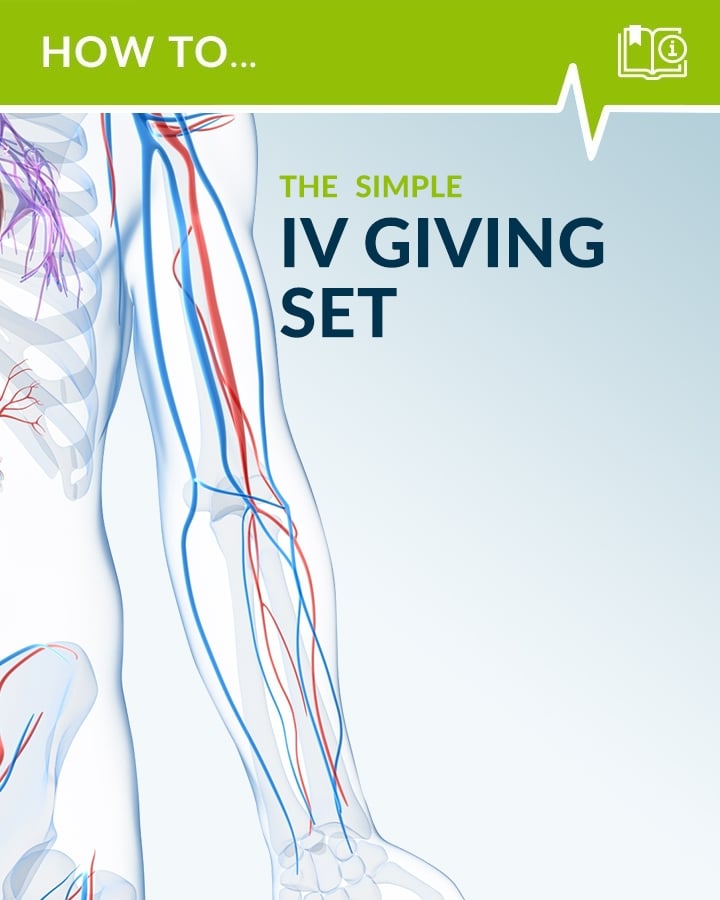 The humble giving set.  Simple in its design, low cost, readily available and frequently used. For many, it is quite simply a lifesaver!

Today, for clinicians and patients the use of such therapy is considered standard practice. Back in the 19th century, however, things were very different...

Back in 1830, prior to intravenous fluid therapy and the discovery of its benefits, the humble giving set knew no real existence.

It was thanks to Dr Thomas Latta of Leith, Scotland that the technique was pioneered, in his treatment of UK patients suffering from an outbreak of Cholera during 1831-1832. However, the theory that led to this development can be traced right back to the Middle Ages.

William Harvey is cited as being the first to fully understand the anatomy and physiology of the human circulatory system, back in 1628! Subsequent experimentation on both animals and humans eventually gave rise to Dr Latta's development of the IV infusion technique.

Dr Latta identified that Cholera patients experienced a 30% reduction in the water content of blood and that it was important to replenish this missing fluid content. He wrote extensively about his use of the Read Patent Syringe to re-introduce this by 'throw[ing] the fluid immediately into the circulation.'

Infusion therapy in the 20th century

Despite the initial positive reaction by the medical profession to the benefits of this new technique, the use of intravenous infusion therapy quickly disappeared after Latta's death in 1833. This disappearance was caused by a combination of factors, including the reduction in Cholera pandemics, which left no impetus for physicians to develop the technique further; and the scepticism of some medical professionals.

It was not until the discovery of blood groups, and World Wars I and II that the use of IV infusion therapy gained popularity. Improvement in plastic materials in the late 20th century made the use of infusion therapy easier, cheaper, more accessible, and provided improved levels of infection control.

IV infusion therapy is a daily part of treatment in clinical settings - within hospitals, care homes and the pre-hospital field. It is commonly used as an integral part of treatment regimes by paramedics and doctors responding on land ambulances and air ambulances, particularly in the management of traumatic injury.

Just over a decade ago the pre-hospital focus for the use of IV infusion therapy, particularly in managing medical shock and traumatic injury, was to provide large fluid boluses. Current practice now supports a more measured approach that ensures the patient maintains a base level (systolic) blood pressure. This minimises the risks associated with fluid overload from the use of fluids like saline that have no oxygen-carrying capacity.

The JRCALC 2019 Clinical Practice Guidelines and JRCALC Clinical Guidelines 2019 Pocket Book contain up-to-date information on IV fluid therapy.  We highly recommend purchasing a copy of these guidelines as they contain essential guidance on the administration of IV fluids. 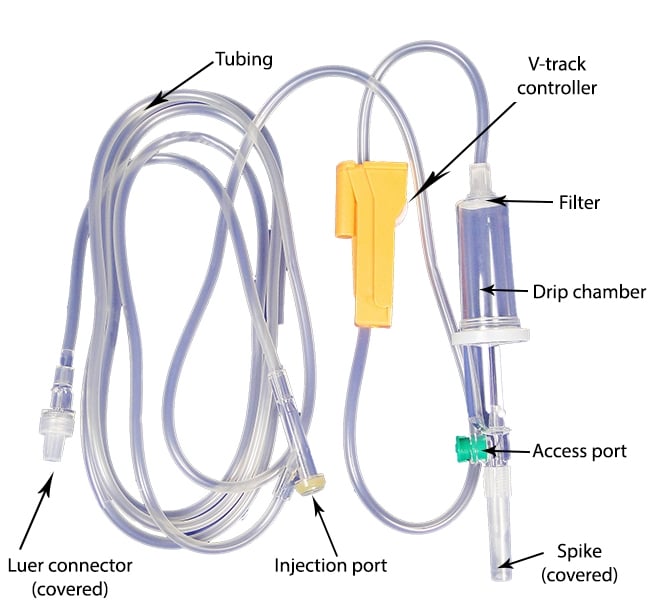 In the pre-hospital care setting two different types of gravity IV infusion therapy sets are used. Those for giving non-blood products (e.g., saline) and those for giving blood products.  The B.Braun Single Chamber IV Infusion Set is an example of a set used for the administration of non-blood products, which features a single chamber and 15 micrometer in-line filter.  For the administration of blood and blood products, we recommend the dual-chambered Shermond Blood Infusion Set, with a 200-micron filter designed to allow larger particles to pass through it.

There are other varieties of these two core types that exist, with some having drug injection ports, clamps and graded flow controllers. The image provides an overview of the core components of an IV infusion therapy set.

The humble giving set, related techniques, and prevalence of its use have changed significantly since its very early beginnings in the Middle Ages and the early 19th century.  Today it continues to hold its place in modern-day medicine and clinical practice.  Although the administration of large bolus fluids, particularly in pre-hospital care, has changed, we still expect the giving set to be around for a few years to come!

The next time you use an IV infusion therapy set, or if you are unfortunate to be on the receiving end of one, consider the history behind it as it is more than ‘just a bit of plastic’. It’s often a life-saver!

If you need expert advice on IV infusion therapy products and associated products, please contact our team on 01329 311451. You can also explore our range of these products on our IV Cannulation and Fluid Therapy pages.

Other sources are linked directly within the article. 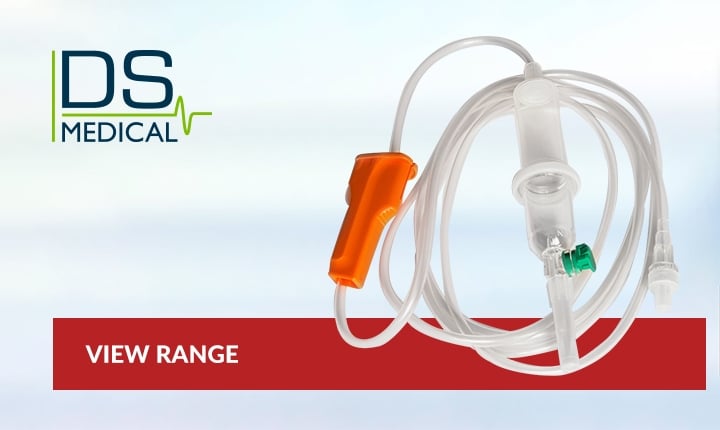